There’s so much snake oil in education that when something with the potential to really help learners comes along, there’s a chance it’s overlooked; this mustn’t be the case with cognitive load theory. The evidence to support this theory is compelling and educators should take note. Like much research in education, cognitive load theory has been around quite a while, but has only recently come to the surface for many teachers like me. What strikes me most about the theory is the hard evidence that supports the common-sense idea this theory asserts, which is that often less is more when teaching.

The evidence to support cognitive load theory tells us that we often make two distinct errors in teaching. Firstly, we frequently stifle learning because we overload children’s cognitive processing capacity so that little of what we teach sticks. Secondly, we give children problem solving activities prematurely, before content or skills are properly learnt, which slows down learning, or even prevents it altogether. These two points are driven firstly by mistaken ideas about the distinction between engagement and learning and then how children learn the kind of information we need to teach in school.

To begin with, we need to understand that  learning involves the processing of information in the working memory enough times that it transfers to long-term memory where it becomes unconscious or, what lead theorist John Sweller calls, automatic. Here information is imprinted onto the unconscious mind rather like a foot print pressing into fresh cement which then dries and remains. Information processing in the working memory is more like a foot print in very wet mud which soon disappears.

Another good analogy for the process of transferring from working to long-term memory is learning to drive a car. At first, we have to practice very deliberately, in a very controlled, clunky manner so we process each action and we have to do this a number of times (more for some people as we know).  Then eventually, our driving becomes unconscious and automatic, so much so that we often have that feeling that we have driven a whole journey without thinking about driving once. Usually, this doesn’t mean we were out of control, but rather our unconscious long-term memory was in charge.  This development in how information is processed is the transfer of information from controlled processing to automatic procedure. This is how learning sticks.

Now we experience distraction, engagement and learning (hopefully) in the classroom, but teachers are not routinely trained in understanding cognitive capacity. We recognise when children don’t learn, but it’s always hard to pin point why. Sweller asserts that working memory in most healthy humans can process around 3 to 4 ‘elements’ for around 20 seconds. This means that working memory is small and information doesn’t hang around in it for long at all, like that foot print in the soggy mud.

Cognitive elements are not the same for each person or for each set of information and they will change as learners develop, but essentially elements are chunks of information the mind processes. A very basic example might be the word frog. This might comprise of one element for an experienced reader, but f-r-o-g might then be comprised of four elements for a beginner reader. However, the working memory can only hold around four of these in a short period of time before that information is lost.

Now, when giving instruction to pupils there are two factors we teachers have misunderstood, or simply never thought about. Firstly, the limitation in the working memory and secondly the breadth of extraneous auditory and visual cognitive information created through either poor instruction, or an overloaded classroom environment. Put simply, when we create for example, an all singing, all dancing power point  to teach say column addition, it’s likely that the juicy information on how to actually add in columns doesn’t stick because the working memory of those pupils looking at that PowerPoint is overloaded with extraneous visual elements, or what Sweller refers to as ‘redundant information’ (Sweller calls this the redundancy effect).

Below is an example of the kind of power point page or flip chart I have seen many times in primary classrooms (in fact, I’ve seen many more that are even busier!) Now, clearly the maker of the page has gone to quite a bit of trouble to make it appealing to young children and help support pupils learning how to add in columns. However, it is likely that there is too much visual information to process here. In addition, the teacher will probably be talking at the same time to explain each part; they might even have music on to supposedly ‘settle’ the children – all adding more auditory information to the cognitive load. 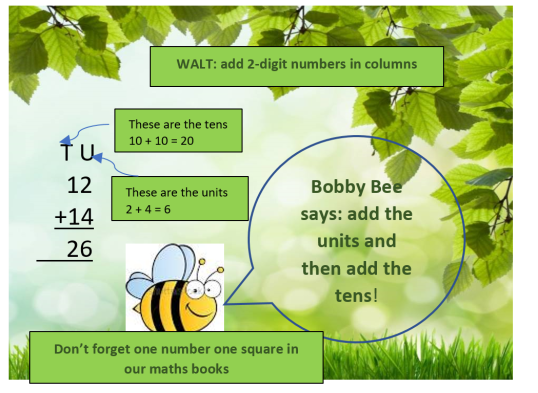 The mind processes large amounts of information without us realising it, so while a child might try hard to take in the main points (adding units and then tens) their cognitive capacity will be bursting at the seams with two sets of basic instructions, a colourful bee character, leaves, grass, arrows, boxes… and so on.  It’s no wonder children might go back to their tables to add numbers and be unclear on what to do.

Cognitive load theory suggests that when we cut out the extraneous, ‘redundant’ information it will be easier to process. We cannot say for certain how many cognitive elements are on that page for each pupil, but cutting down visual and auditory extras will help pupils process the content we want them to. According to cognitive load theory, we are less likely to overload the working memory when instruction is pared down, such as with the page below for example.

Then the right information is more likely to be held in the working memory ready to be applied to repeated practice so that all important imprinting takes place and information is transferred to the long-term memory.

Often as teachers we like to give children problem solving activities. We like these because they promote collaboration, dialogue and we believe they help children to develop their thinking skills. Learning through enquiry or discovery learning has come about through considering how children learn for example, how to speak and walk. In these situations, children aren’t given direct instructions from others on how to speak or walk, but rather they seem to learn by soaking up the skills and knowledge and simply ‘having a go’. This seemingly natural process of learning has been thought to also work when giving children problem solving activities. This is in the hope that by solving problems children learn how to solve problems.

However, according to Sweller, the information we want children to learn in schools isn’t the same as speaking or walking because humans have evolved to learn to walk and speak. This is, as Sweller asserts, ‘knowledge through instinctive acquisition’.  However, humans have not, for example, evolved to learn how to add in columns – this is what Sweller refers to as ‘non-instinctive knowledge’. In essence, some information we are pre-programmed to soak up and other information we aren’t born with the programming for, but only the capacity to learn it from others in a deliberate way.  Sweller calls this type of information, ‘knowledge absent from the natural world’.  Put simply, leave a bunch of homo sapiens on their own and they won’t learn algebra, but they will learn to communicate and walk about.

Essentially, this type of non-instinctive knowledge is learnt more efficiently from a more knowledgeable other who instructs or ‘teaches’ that information. According to Sweller, it is in this way that society or communities of people might remain illiterate or innumerate unless another human intervenes and teaches.  Because of this, it is very difficult to learn non- instinctive knowledge through problem solving. Children look busy and engaged when problem solving, but not much is being transferred from the working to the long-term memory because all that processing capacity is involved in lots of extraneous content outside the specific knowledge to be learned, as well as simply finding a means to an end rather than processing content information.

This is not to say that human beings can’t learn through problem solving at all, it’s just a slower, less efficient kind of learning. For example, a human being could get in a car for the first time (with the key in the ignition) and after much trial and error work out how to drive the car; many people won’t ever work out how to drive it though. However, we all know that having direct instruction from another will dramatically change this. This is why we have driving instructors… and teachers for that matter.  Like this, when it comes to the knowledge outside our natural evolutionary instinct, this is the best way to learn. Obtaining information from another is more efficient than learning through problem solving.  As Sweller notes, problem solving remains a ‘secondary option.’ Personally, when it comes to my son learning to drive, I’m glad I took the first option even though it cost an arm and a leg!
For example, a teacher might use this problem below in an attempt to help children learn their number bonds to ten:

A child might spend a while with a set of 10 pencils and finally work out the answer is 7, but it’s likely they won’t have learnt about number bonds or how to solve missing number problems either. This would be much more appropriate to give to children who have learned their number bonds and how to solve missing number problems, then they can retrieve that information from their long-term memory and apply it to the problem. This retrieval of information back from the long-term memory to use in processing within the working memory also embeds information further into long-term memory. This is why returning to topics once they are learned is important.

In summary, cognitive load theory gives us the evidence that we need to cut down extraneous material when teaching and this might include doing away with busy displays too close to the area where the teacher gives instruction, cutting out background music and certainly reducing the redundant information in instruction materials like power ponuts  or flip charts. We must not be side tracked by wanting to engage children at the expense of learning. In addition, we also need to avoid using problem solving as a teaching tool, but rather use it as an ‘embedder’ when content and the problem-solving skills required have been learned.

The good news is that I now have a great excuse to cut down the time I spend making power points and displays! At last a theory about ‘load’ that cuts down load! What more do you want!

My grateful thanks to John Sweller for his generosity and advice. John Sweller is Emeritus Professor at the School of Education, University of New South Wales, Australia.

Another useful paper by John Sweller and Paul Chandler

4 thoughts on “Lightening the load – how to make big gains in learning by doing less.”